Article and Photographs by 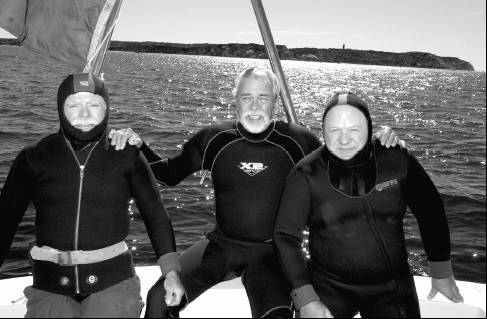 The luxury steamship The City of Columbus sleeps deep in the shifting sands at the edge of Devil's Bridge, about a mile from the Gay Head Cliffs. The 275-foot vessel sank more than a century ago in one of the worst maritime disasters to occur in Vineyard waters, and last Sunday, on a clear autumn morning, three divers went down to see her for the first time.

Buried mostly, the ship is a shadow of herself, and only a few on the waterfront know precisely where she sits. Arnold Carr, 65, of Monument Beach , had been aware of the ship's place in history since he was a child, but repeated efforts to find her in his youth were to no avail. Now, through the help of a friend  who accidentally found her berth more than a year ago  Mr. Carr finally had identified the latitude and longitude of her position and verified the coordinates by using underwater side-scan sonar.

City of Columbus from early lithograph

The 30-foot work boat Amphitrite left Oak Bluffs from the Island Queen bulkhead at 8 a.m. and was on scene by 9:30 . A fleet of 40 recreational fishing boats of all sizes lined the horizon. Small swells came up from the southwest, following a light breeze. The captain and those aboard The City of Columbus had no plans to visit the Vineyard on that stormy, cold morning of Jan. 18, 1884 . The six-year old ship was en route from Boston to Savannah , Ga. , with a stop in New York . On board were 80 first-class passengers and an additional 22 in steerage. One-third of those aboard were women and children. The crew numbered 45. For her day, she was a handsome ship and well regarded. At 3:45 a.m.  in the midst of a severe gale  the ship hit a rock so severely that she punctured a large hole in her bow. Capt. Schuyler E. Wright reversed the ship, but had no time to drive her to the beach before she was awash and sinking. The captain later wrote: The sea was breaking over the steamer's deck and the stern being entirely under water, we were forced to go up on top of the houses. I stopped there a while, but we were finally obliged to take to the rigging.

The Massachusetts Humane Society's lifeboat from Gay Head, crewed by members of the Wampanoag Tribe of Gay Head (Aquinnah), rowed to the scene. Through their efforts and the help of the U.S. revenue cutter Dexter, 10 passengers and 16 seamen  none of them children and none of them women  were rescued. Only 34 bodies were later recovered. An editorial in the Vineyard Gazette ran soon after: The disaster of last Friday has stirred our Island community to a degree seldom experienced in respect of tragedies, however harrowing, in which the people had no personal interest. But this horror occurred at our very doors.

Mr. Carr knows the story backward and forward. As a young teenager growing up in Oak Bluffs, he and his friends dove and identified many Vineyard shipwrecks, among them the World War I era ship Port Hunter, off East Chop. He continued his underwater exploration as an adult, visiting many ships in the area and traveling as far as the Straits of Taiwan to dive for sunken airplanes. His love for the ocean led to a career as a fisheries biologist for the state Division of Marine Fisheries. But he said the mystique of The City of Columbus never faded.

With Mr. Carr aboard the Amphitrite Sunday morning were the friends who had also sought the ship as teenagers: Sam Low, 61, of Oak Bluffs; Dick Jones, 69, of Vineyard Haven, and Arnold Carr's cousin Dick Carr, 74, also Oak Bluffs. The last time they were together for dive was 40 years ago. In their earliest efforts to find the ship, when they were boys, they made a sled that could be towed along the sea bottom. One diver clung to the sled and kept a continuous eye on what was ahead. They made many sweeps across Devil's Bridge but never found a trace. They spent six summers in pursuit of the wreck without result, but they found many other ships.

Mr. Jones recalled being towed on the sled. It was made from plywood and two-by-fours, and was towed 300 feet behind the boat. The sled was towed by power boat going one or two knots, he said.

You kept looking ahead, you didn't know what you were going to run into, said Mr. Low. Your imagination would get ahead of you. Oh, and there were sharks. We were always afraid of sharks. Back then all we knew was to be afraid sharks. Today we know so much more about sharks, it is different.

On this Sunday morning, Mr. Carr verified the location of the sunken ship quickly by dragging an electronic side scan sonar fish a few feet behind the boat. Pictures of

the bottom flashed on his laptop computer screen. Mr. Carr saw an outline of the bulkhead rising a few feet above the sand. It was the ship, 32 feet below the surface.

The three men put on their coal black wet suits and scuba gear, and together dove. They followed the anchor line to the bottom. There, they discovered they had dropped anchor right on the sunken vessel. The ship was hidden by sand except for portions of bulkhead that stood three to five feet above the bottom. The bow faced southwest and the stern pointed to the northeast. There were rivet-covered steel plates, and scup swimming nearby. During the 45-minute dive they explored the forward port side of the ship. Though Mr. Carr timed the dive to coincide with the slack current, the currents never stopped. The area is notorious for strong and fast currents that can sweep a diver from his place. The water temperature was a cold 56 degrees.

The debris field seemed to stretch at right angles to the ribs and we followed that direction, Mr. Low said. Visibility was maybe 10 to 15 feet. I could see the yellow of Arnie and Dick's tanks through the sediment from about 15 feet away.

Not far from the bow, Mr. Carr saw what he suspected was the culprit that brought the ship down 121 years before. It was a huge split rock rising 10 feet from the bottom, with one large piece ajar from the main. It was as big as a Hummer, he said.

Within the area of the hull, the three found a broken ceramic vase cemented in place by rust and marine growth. But the greatest find of all was a half buried deadeye  an important find on any sunken ship  attached to the side of the vessel. Nearby they discovered a coil of wire. Mr. Low said: Wherever we stopped to fan away the sand, we revealed some kind of structure, mostly rusted. Occasionally we found pieces of wood still preserved after more than 100 years. Near where we found the deadeye there was what appeared to be a hatch combing half-buried. A hatch combing is a bulkhead entrance from which a hatch door is attached.

With the dive over and all aboard the Amphitrite, the group cheered simultaneously. The three divers and their assistant talked incessantly amongst themselves about what they had seen and touched. Caught in the moment and brimming with enthusiasm, they were children again.

Did you see that? Wasn't that great?

The wreck is all over the place. Oh man!

That was great! Arnie put us right on top of it.

Once the diving gear was stowed and the men were out of their wetsuits, a bottle of champagne was opened. As the boat headed home they gave a toast to the dive and to the value of their adventure.