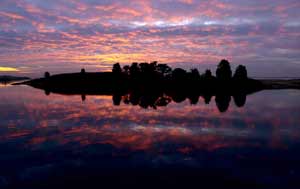 Now - as I pilot my boat through the channel and into the harbor - I recall my father.

His boat was a Jersey sea skiff built by Hubert Johnson. It was lap strake, 24 feet long. He named her Dollop which means "a little bit" as in a splash of bourbon . When my father throttled back to enter the channel, the engine's heat rose into Dollop's cockpit. It smelled clean and comforting. There was the sweet aroma of fish covered by wet rags in the wire basket.

Turning toward our pier, I saw my grandmother waving from the house overlooking the harbor. Or my grandfather holding up his hands, palms upward: "How many fish?" We held up the requisite number of fingers.

We tied to a dock owned by an uncle - Stan Hart - who kept his boat on the other side. They were, over the years, mostly Erford Burt boats - carvel planked with smooth hulls that rose to the bow with graceful sheer. Each bore the name of a sea bird - Kittiwake, Curlew, Mollyhawk. Mr. Burt built no-nonsense craft for Vineyard waters.

Stan kept his dock lines neatly coiled. His boathouse stood at the head of the pier and I remember manila rope hanging neatly on pegs and the smell of oil, varnish and paint inside. He dressed in khaki. A marlin line descended from Stan's belt into a pocket where it was tied to a folding knife with many blades. I remember that his laugh came from his belly.

We cleaned our fish on a table nailed to pilings. My father taught me to lay the knife flat along the vertebrae and slice smoothly, feeling for the bones, leaving little behind. Fish heads and skeletons accumulated in the harbor's clear water - attracting blue claw crabs. I would net them for dinner. At night, the skeletons attracted eels and we speared them in the beam of a flashlight. 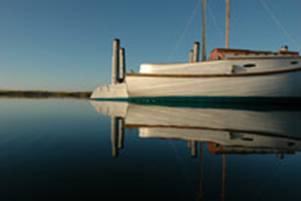 Docks sprouted up and down the harbor. There were catboats, small sloops, a schooner and two more Burt boats. Every morning I rowed the harbor in a skiff, dipping the oars in still water, the blades casting diamonds as I reached for another stroke. The oarlocks were galvanized steel, grey, covered with salt and they creaked as I rowed past the homes of my extended family - aunts and uncles and cousins. These folks are gone now - yet the harbor evokes them.

For almost fifty years I have sallied from this harbor in boats of many kinds. Coming home from the sea, I find the place peopled by friendly spirits. Stan is in his boathouse, coiling rope. Curlew and Dollop are tied to his dock. There is also Sea Pup, Stormy Petrel, Red Snapper, Windward II, Hart's Desire. I see also their captains. My grandparents wave to me. My father scales fish.