Article by Sam Low
Author of

Voyaging aboard a replica of an ancient Hawaiian canoe 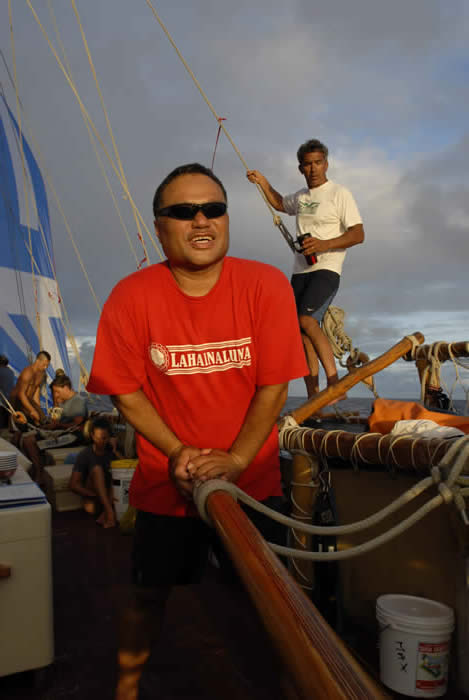 Chad Baybayan stands about five feet eight inches. He has a swimmer's body, suggesting a capability of delivering powerful strokes and a strong finishing kick. He is dark both by genetic makeup (he is part Hawaiian, part Filipino) and because he spends a lot of time in the sun attending to his duties as one of Hokule'a's navigators. Chad will readily tell you that voyaging aboard the canoe has been the seminal experience of his life - accounting for the fact that he is now a respected leader and mentor, for his happy marriage and fatherhood, for his inner sense of confidence. "When I first saw Hokule'a in 1975, it just grabbed my heart. I knew that if there was anything in my life that I wanted to do it was sail on her."

For a time, it appeared that Chad's wish might not happen. Chad was too young for the 1976 voyage to Tahiti. In 1978, when the canoe swamped on a second journey, it looked like voyaging might end. But shortly thereafter, new management took over the Polynesian Voyaging Society and Baybayan spent countless hours working with sandpaper and paintbrush, helping to overhaul the canoe for another voyage. In 1980 he made his first ocean passage to Tahiti as the "youngest member of the crew" and began to study navigation by "asking Nainoa Thompson (the canoe's navigator) a lot of questions." During the next nineteen years he spent as much time as he could afford aboard the canoe, eventually working his way up the informal hierarchy to full fledged navigator.

Chad is often chosen to be the Voyaging Society's spokesman. So it was that one evening Chad stepped forward to talk to crew candidates for the upcoming voyage between Hawaii and Rapa Nui (Easter Island). The men and women assembled before him were about to go through a final four day training session that would include an open ocean swim of nearly two miles, a sail aboard Hokule'a, and many hours of testing their navigation and seamanship skills. They all knew each other well. Most of them, excluding a few young rookies, had sailed on previous voyages during the canoe's twenty-five year career.

"You are all here because you share a powerful vision for Hawaii," Baybayan told them. "And that vision joins you together across differences in ethnicity and race and where you may have been born and raised. You share a common desire to make this world better."

Baybayan's notion of ethnic and racial unity was not always a part of the voyaging consciousness. The early 1970s marked a cultural revival among Hawaiians that inspired not only pride of ancestry but it also renewed painful memories of a history marked by near genocide, loss of land, and culture which, at times, led to dissension between Hawaiian and non-Hawaiian crewmembers. But now, many years later, seated before Baybayan were men and women of many extractions - Chinese, Filipino, Japanese, Hawaiian, Portuguese, German, English, American. They had shared hundreds of hours working together during which potential differences between them had come to mean not a whit.

Confronting the sea on long voyages, Chad has had much time to integrate all that he has learned and he has done so by bundling an astonishing number of lessons into a general philosophy that he (and the other sailors and navigators as well) calls "wayfinding."

Chad distinguishes wayfinding from non-instrument navigation - the technical art of finding land without the use of instruments or charts. He will tell you that wayfinding is "a way of organizing the world." He has also said that it's "a way of leading," "of finding a vision," "a set of values," "how to take care of the earth," and, in general, "a model for living my life."

Chad's vision of wayfinding stems from the teaching of Myron Thompson one of our great kupuna (Hawaiian for “wise elder”) and it contains principals that appear astonishingly universal and timeless, while, at the same time, being rooted in values that Hawaiians have come to recognize as inherent in their own unique history. Values like vision, for example.

"Our ancestors began all of their voyages with a vision," Baybayan explained during his talk to the assembled crew. "They could see another island over the horizon and they set out to find these islands for a thousand years, eventually moving from one island stepping stone to another across a space that is larger than all of the continents of Europe combined."

"After many years, I began to understand that wayfinding was really a model for living," Chad continued. "Once you have the vision of a landfall over the horizon, you need to develop a plan to get there, how you are going to navigate, how much food you need. You must evaluate the kinds of skills you need to carry out the plan and then you must train yourself to get those skills. You need discipline to train. Then, when you leave land, you must have a cohesive crew - a team - and that requires aloha - a deep respect for each other. The key to wayfinding is to employ all these values. You are talking about running a ship, getting everybody on board to support the intent of the voyage, and getting everybody to work together. So it's all there - vision, planning, training, discipline and aloha for others. After a while, if you apply all those values, it becomes a way of life."

Chad’s concept of wayfinding is not exclusive to him. It is, in fact, shared by everyone who is attracted to the canoe and who sticks around long enough to learn the lessons it has to teach.

In the last decade or so, the philosophy of wayfinding has "moved ashore" so to speak. New words have entered the wayfinding vocabulary, "stewardship" for example, or "sustainable environments." Lessons learned at sea are now being applied to the land. The ancient philosophy of wayfinding is now merging with the new world view of environmentalism, as Chad explains: "To be a wayfinder, you need certain skills - a strong background in ocean sciences, oceanography, meteorology, environmental sciences - so that you have a strong grounding in how the environment works. When you voyage, you become much more attuned to nature. You begin to see the canoe as nothing more than a tiny island surrounded by the sea. We have everything aboard the canoe that we need to survive as long as we marshal those resources well. We have learned to do that. Now we have to look at our islands, and eventually the planet, in the same way. We need to learn to be good stewards."

This new vision is at the core of the Voyaging Society's "Malama Hawaii" (care for Hawaii) and “Malama Honua” (care for the planet) program which we celebrate on the upcoming voyage of Hokule’a around the world.

"When we set out around the world (scheduled for May of 2014), we honor the first 41 years of Hokule'a's life and the achievements we've all realized working together," Nainoa Thompson once said. "Since 1975, the canoe has sailed more than 140,000 miles, taking us to each of the points of the Polynesian Triangle. We've learned a lot during these voyages - the power behind shared vision, the energy generated through collaboration, the continuing thrill of exploration and discovery and the joy of kinship."

"But by far, the most compelling lesson we've learned in all of our travels has to do with home. We've come to appreciate anew, the uniqueness of Hawaii and her people and our responsibility to work together to care for and sustain our island’s natural resources."

"Learning to live well on islands is a microcosm of learning to live well everywhere,” Nainoa continued. “Here in Hawaii we are surrounded by the world's largest ocean, but Earth itself is also a kind of island, surrounded by an ocean of space. In the end, every single one of us - no matter what our ethnic background or nationality - is native to this planet. As the native community of Earth we should all ensure that the next century is the century of pono - of balance - between all people, all living things and the resources of our planet."

Hawaiki Rising – Hokule’a, Nainoa Thompson and the Hawaiian Renaissance is available on Amazon.com and in many good bookstores.