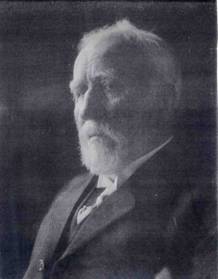 The Hart family first came to the Vineyard in the 1870s from the Hardware Capital of the World - New Britain Connecticut . The family patriarch - William H. Hart  was president of the Stanley Works. He was an inventive man, with many patents to his name, and is credited (at least within the family) with developing the first American cold rolling process for manufacturing steel. 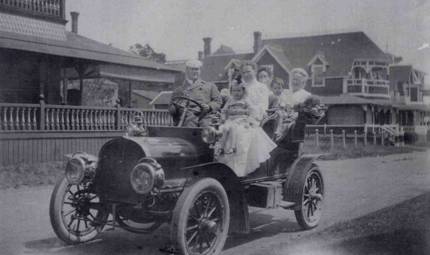 In 1871, William Hart purchased five lots from the Land and Wharf Company in Oak Bluffs which he combined to provide an ample family compound. In 1873, he bought three more lots.

William and his wife Martha had five children - George, Howard, Edward, Maxwell, Walter and Martha. For more than 40 years the family summered in Oak Bluffs, but in 1911 William began buying up land to the south of Farm Pond, eventually acquiring property that extended all the way from the end of the Oak Bluffs seawall to the second inlet into Sengekontacket Pond. This was the beginning of a family settlement soon to be called Harthaven.

On September 17, 1914 , a Vineyard Gazette reporter visited William and Martha Harts' new home and published a gushing report. There is a prospect that more new houses will be built in the new Hart Settlement off the Beach Road , she wrote. It was our privilege to be shown over the lovely estate and new summer residence of Mr. Wm. H. Hart one day last week. Here are all the latest modern improvements and conveniences. Electric bells and electric lights all over the house and on the spacious piazzas. The interior of the house is of hard wood, finished in natural color. Fine oriental rugs cover the floors and the furnishings and hangings are all in keeping. Mr. Hart has built a fine circular driveway made from the Beach Road up to and from his residence. This has been concreted. The house sets a long distance back from the road and is in the midst of groves of oaks and pines. A fine view of the sound is seen from the house as well as the interior ponds upon which his land borders. Mr. Hart has had broad roads cut through his land making a drive through the woods a great pleasure. There is no doubt but that this estate will be one of the beauty spots of the town in a few years. The White House, as it is called by Harthavenites, is now owned by the Allen Moore family and still stands to the right of Beach Road as you drive along it from Oak Bluffs to Edgartown. 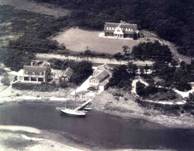 William H Hart laid out lots and formed a company  Hart Realty  to manage and sell them. The community filled out. Martha Hart married Ethelbert Allen Moore and their house was built side-by-side with those of Howard, Walter, Edward and George.

Life in the community was almost studiously informal  a place to escape the cares and the formalities of the mainland. The older crowd seemed to exude a way of life that was abundant in humor and action, remembers Stan Hart, and a style that flowed from a Yankee heritage. Another Yankee, Ralph Waldo Emerson, cautioned his fellow Americans  those who were borrowing their customs, morals and lifestyles from England and other European countries  when he wrote: Insist on yourself, never imitate. I think of the older crowd that way. I doubt that they consciously imitated anything. They were as natural as an August nor'easter or the herring run that fed through Harthaven into Farm Pond in Oak Bluffs.

The first thing we would do when we got to our Harthaven house, Howard (Howdy) Eddy recalls, was get our bathing suits on, run down our driveway in bare feet, across the Young's land and into the Sound. Delicious! Harthaven was the best darned place to grow up! 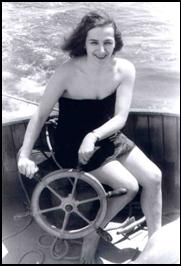 Early on, the community centered around the harbor where many residents kept their boats. Howard Hart is remembered for his speed boat  called Wildcat  which he docked in Harthaven. Great Uncle Howard Hart, always known to us as Jim, had a succession of boats, Pete Hart remembers. One of the most memorable was the wildcat, a high-speed boat. He loved taking us out on it. He also had an enormous catboat and he would take us kids out for a ginger ale and gram crackers sail. And then there was his enormous Pierce Arrow, into which he would cram up to 17 kids for an excursion to Edgartown for an ice cream party.

A legend grew up around Jim, John Moore recalls. Apparently, during Prohibition, as he was returning to Hart's Harbor, he was hailed by the Coast Guard as a suspected rumrunner. Instead of heaving to, he gunned his powerful twin-engine speedboat, the Wildcat, and headed for the harbor at full speed. The Coast Guard cutter tried to follow him but they didn't know the tricky channel to the old opening... and ran fast aground in the shallows near the beach.

Jim is also remembered for his sailing lessons. Jim, our great uncle Howard Hart, bought a number (six, I think) of two man sailing dinghies, Bung Young remembered, and had us racing several days a week, sometimes in Farm Pond, sometimes in Nantucket Sound. They were essentially rowboats that he had fitted with a centerboard, a mast and some kind of a rag for a sail. When we were off Buoy Beach , he would have seamanship races that required the crew to wait for the starting gun before swimming out to their boats, weighing anchor and raising sail and heading for Harthaven harbor without colliding with a fellow
contestant.

I was always a little afraid of participating in the races and I never really wanted to win, recalls Lucy Hart (Bideau) Abbot. Howdy Eddy was probably the best sailor, and he was always kind to me. Phronsie Vibberts and I were about the only girls participating in these races. I did like to sail by myself, but I didn't like Jim yelling at me during the races. It seems we were barefoot all summer.

The community matured as children were born to the original settlers, then grandchildren, and as other relatives and friends moved in and built houses. Today, Harthaven remains a tight knit community enriched by many new residents who are drawn here by its history and its unique sense of place. Ally Moore 's feelings about Harthaven are similar to those from the past, indicating that little has changed in the ninety years since its founding: It's where, as a little boy, I learned to ride a bike, first wobbling down the White House lawn. Later that day, while navigating the circle around the house, I finally ended up crashing into the huckleberry bushes after failing to step on the brake. Last December, my wife Michele went into labor and at midnight we pulled the station wagon past those same huckleberry bushes and headed out for the M.V. Hospital . I felt that same jittery sense of excitement of first riding a bike, of tentatively and happily steering towards the future and bright possibility, which in this case came the following morning at first light in the form of our daughter, Emily Rose.

(Quotations courtesy of John Moore, author of Harthaven  The Best Darned Place To Grow Up. Copies available for purchase from John at jcmoore3@msn.com)