"as we voyage, we are creating new stories within the tradition of the old stories, we are literally creating a new culture out of the old..." 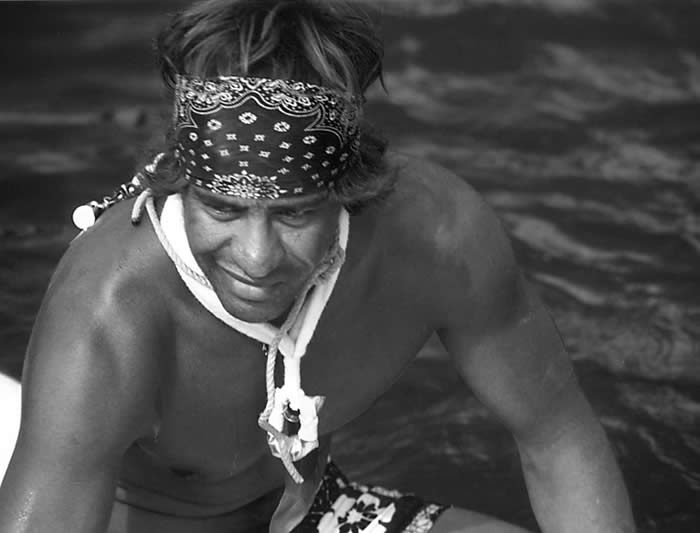 Chad Baybayan: “In 1978 when the canoe was going to go back to Tahiti they had crew tryouts. I got to try out. That was a big experience in my life. The whole richness of the experience was a guy I met in crew training. I went into the room for the first meeting and I saw that they were looking for the big-time life guards, so I felt kind of intimidated. I was from the neighbor islands, and I was real shy. I didn’t know anybody. I thought that my chances probably weren’t real good.

I walked into the room and there was this big wave surfer that had just won a surf contest on Oahu and I kind of didn’t want to hang around in that crowd. I just wanted to leave right away, so as soon as the meeting got done I just rushed up to the elevator. But as I got into the elevator, that big wave surfer got in with me. It was just me and him and I just remember standing in the corner and trying to blend into the walls. That guy looks me in the eyes and in this real Hawaiian way, he walks over and he says, ‘hey brother, we’re going to be trying out for this crew together. Hey, more better we start out by being friends.’ And I still remember those words, ‘more better we start out by being friends.’ And he stuck his hand out and he says, ‘Hi, my name is Eddie Aikau.’ And that is how I met Eddie Aikau. He was probably the most different guy I ever knew. He was like this big wave surfer, but he was just so humble, just so pleasant to be around, so befriending, you know?

He gave me a ride back to school that night and he said, ‘hey, call me up if you ever need a ride or if you ever want to come over and hang out.’ He took me over to where he lived and I met his family and I just found out how really different was this guy.

My esteem, my evaluation of myself was not very high and here was a guy that really just wanted to be my friend. He was just a humble guy and he was a big wave surfer - but so what? It changed my attitude towards treating people. You know, we are going to start off by being friends. I am going to treat you like family because that is what you deserve. Anybody that steps on the canoe, or anybody that becomes involved in my life and the things that I enjoy doing, deserves that kind of respect." 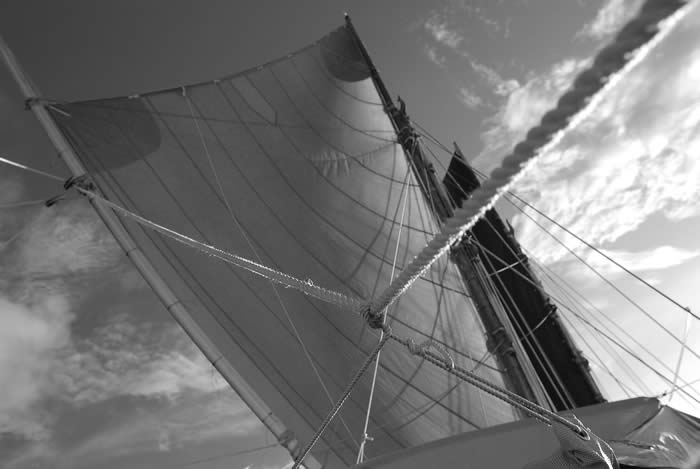 Tommy Holmes: “In its import, the voyaging canoe stands to ancient Polynesian culture as the invention of the wheel to ground transportation, as the spaceship to man’s spirit: epitome and climax.” 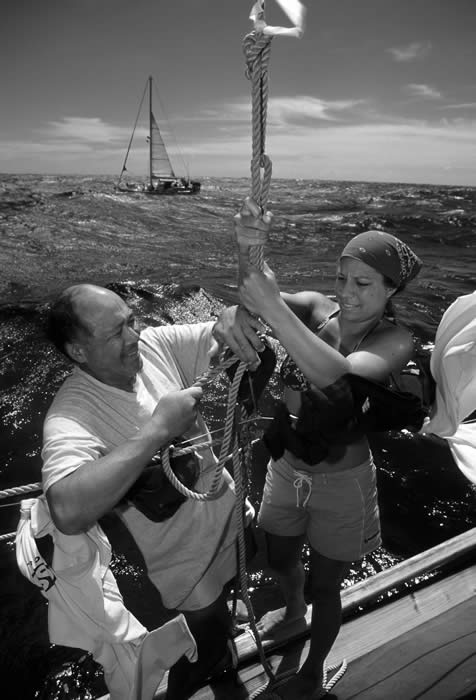 Nainoa: “I remember my grandmother who was pure Hawaiian and her telling stories about speaking Hawaiian for which she was beaten with a stick by her school teachers. She would talk about her uncle, who was an incredible fisherman, yet he always wished that his skin wasn’t so brown. I think the most important thing we can do is to erase that abuse with a feeling of renewal, and one of the ways to do that is to stimulate pride in our history and our culture. That’s why we sail - so our children can grow up and be proud of who they are. We are healing our souls by reconnecting to our ancestors." 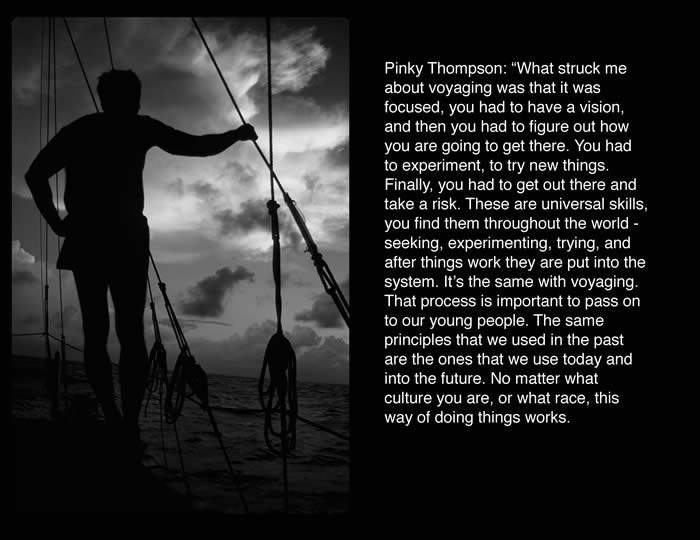 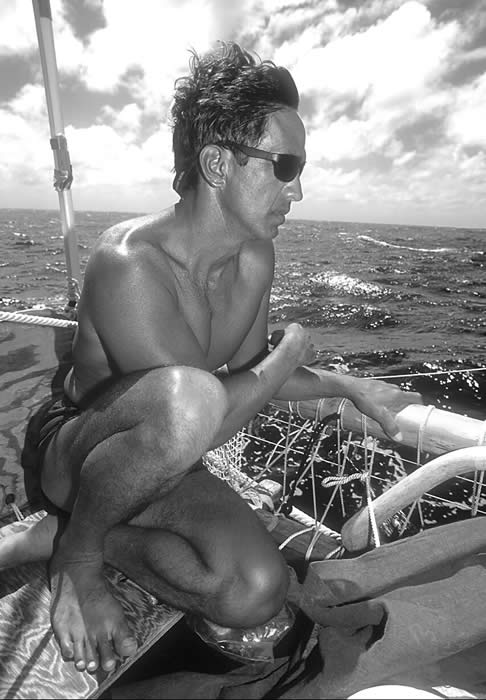 Nainoa: When I look at Hokule’a I see approximately half of my life. I see a community. I see visions of Eddie Aikau – of sacrifice. I see a lot of pain. I see great joy in children. I see it being a catalyst, pulling a lot of people together. I see it demanding. I see sheer beauty in its lines and images. I see it being a part of this new community for Hawaii. The land is going to come back. Hawaiians are going to figure it out. We have really smart people who are really dedicated to all those things that we find special. The canoe unifies the Hawaiian people, and you know when the Hawaiian people are unified, watch out! Because the century coming up really is the century of the Hawaiians. I clearly see it – it is just a matter of unifying around those things that hold us together. 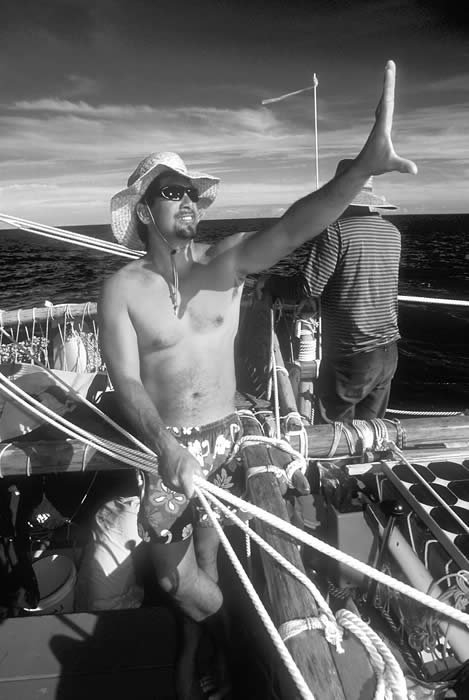 Bruce: “When they used to go to the mountains and cut down trees for the canoes our ancestors didn't think that they were taking the tree's life. There were ceremonies for cutting the trees and addressing the appropriate spirits. They were not taking the tree’s life, they were just altering its essence, taking it from the forest and putting it into the sea, and in Hawaii the sea and the land are tied together.

Everything in the sea has a counterpart on the land. Every plant and animal in the sea has a counterpart on land. A mana opelu is a kind of taro named after the opelu fish the spots on the stock of the taro are the same as the spots on the belly of the opelu. The Kumu fish and the aholehole fish has its counterpart on land as taro, but it’s also the pig. The pig was used as an offering to the gods but when there was no pig available you could use either a kumu or an aholehole from the sea in the offering. Everything that you see on land is tied to something in the sea.

Animals, fish, birds deserve the respect that you treat life with. That's basic. Everything that is living deserves your respect. That's why you don't go cut down forests, or pollute your environment, everybody and everything is related somehow. 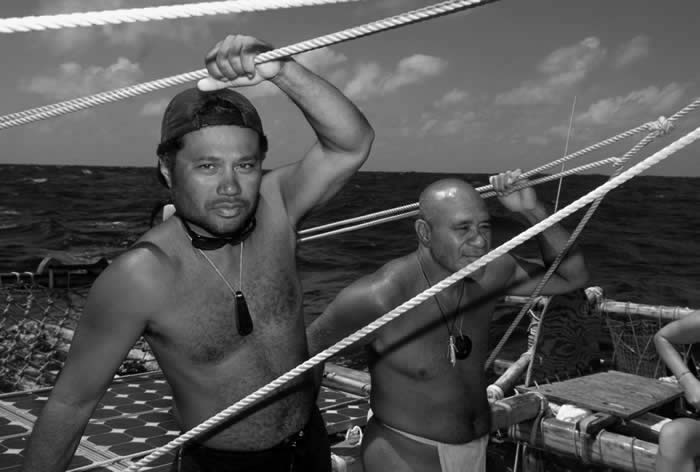 Chad: “When I was really young it was not really a proud thing to express your nativeness. Being Hawaiian, it was, you didn’t rush out and say ‘I’m Hawaiian,’ but I always felt that sense of hidden pride. But now it is okay to feel Hawaiian, it is okay to recognize what your cultural roots are. That’s one of the benefits of the resurgence of voyaging – to express the proud voyaging heritage that a lot of people never recognized before. It was just a start of something that made me real strong. But that was back in 1975." 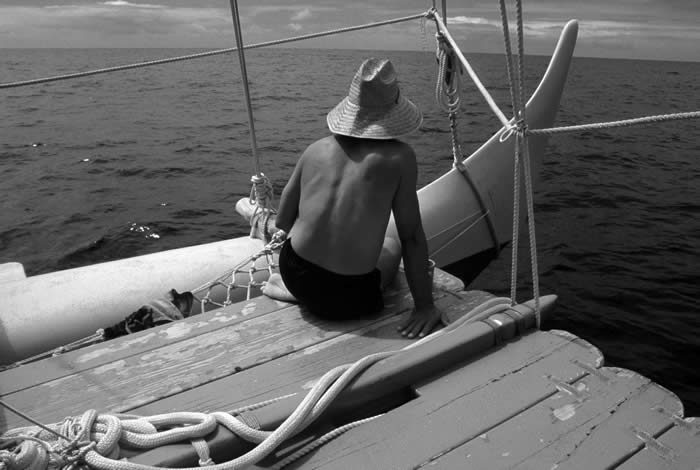 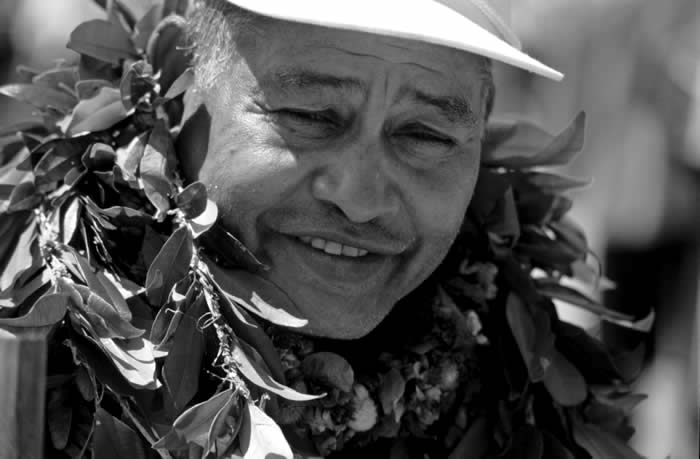 Chad: “You look at Mau. We would not have any navigators here today if Mau hadn’t been our first teacher. You look at how unselfish Mau was in his teaching. Mau never put a restriction on what we could learn. That is the idea of caring and perpetuation. I look back to Mau and his whole idea of perpetuating his art from one generation to the next. We need to do this and the best way to do it is education. So teaching the next generation has become real important." 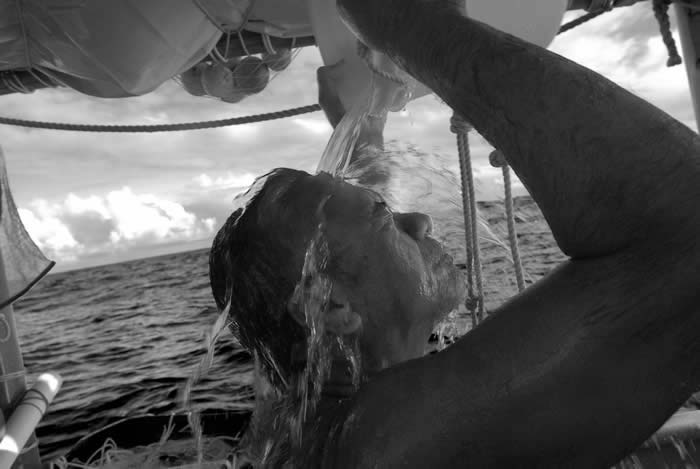 Billy Richards: “I am going to Satawal to honor Mau. Mau is an incredible person. We were fortunate back then (1975) in learning from him. It was more than navigation. He taught us one hundred and one ways to use a coconut. Down at Snug Harbor he would teach us dances - in 1975 - because we were all living in the containers. Mau worked with us all day and at night we would have this star course – he would make you a star and then he would teach you this dance and as you move, the choreography of the dance is such that you understand the movement of the stars. Me – this star – in relation to you – your star – how we move together. He taught John (Kruse) how to make this Jew’s harp out of bamboo. He was our doctor. He was our mother. I went surfing at Queens one time and I crunched my knee. It got really huge. I came back to the container and he saw it. ‘You come.’ And he poured coconut oil on it and did this massage and the bruising went away. He was holistic. Navigation is just one part of him. There are so many others. For those of us who lived with him, or stayed with him down at the container we saw glimpses of it. And it is in my heart.” 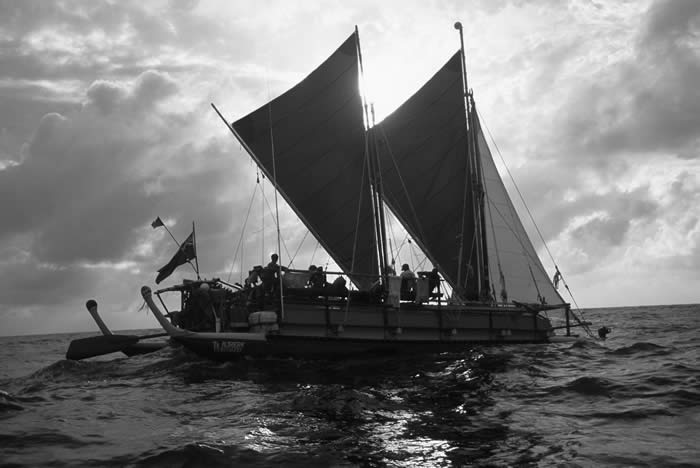 Nainoa: “We asked the people of New Zealand to select a person to come to Hawaii to learn navigation. We asked them to select the best person. They sent Jacko Thayer to us. I asked him if he had a lot of experience on the sea. He told me no, he had never been to sea. My God, I thought, why did they send us this person? Later I found out that he was a school teacher. The community had selected him because he would come to us and learn and he would bring the knowledge back and share it with everyone. That was their criteria for selection. He learned to be a good navigator and later, when he went back, he taught his people what he had learned.” 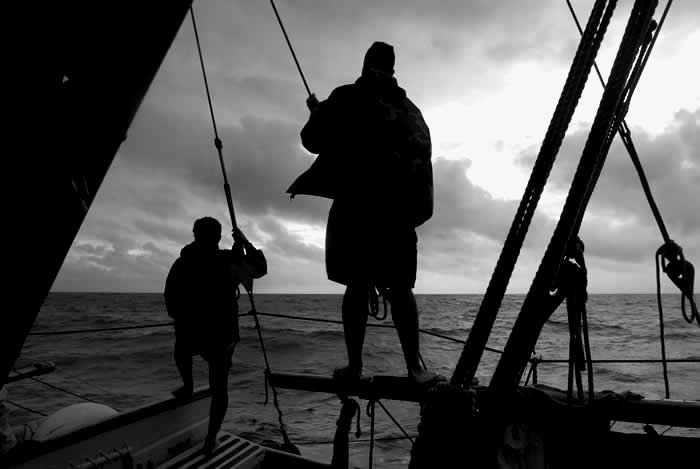 “Our canoes have been envisioned, maintained and sailed by all the people of Hawaii regardless of race or religion. We have got to remember that we are all one people.”